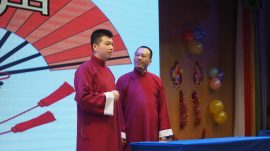 The assembly started speech (in Chinese!) expressing his best wishes to all students, parents and teachers.

The first show, ‘Little Apple’ by the G7s was full of dancing and created a cheerful and delighted atmosphere.

When western piano and violin met Chinese calligraphy, what a fantastic example of ‘East Meet West’!

The Opusculum, ‘Cheap Airline’, performed by Simon and Sam, was popular with the audience.

The CNY assembly also featured a parent performing. A comic dialogue was given by IG1 Micheal Huang and his father, and what a professional performance they gave us!

‘Dream of Phoenix’, a comedy performed by IG1 students, was not only interesting but also motivational – we are the teenagers with a dream.

We also had dancing, an accordion solo, a band performance, and last but not least a Chinese song performed by Mr. Morris, Mr. Javiar and Mr. Odunlami which brought the house down.

2017, we are looking forward to being with you. Have a super year!