On November, 24th and November 25th, the students of LS Secondary, enjoyed this year’s English Festival. Split between two days for the students at the Kangqiao campus and the Xueye campus, there were cheers, fierce competition and lots of laughter.

The grade 6 students at the Kangqiao campus experienced their first ever English Festival on November 24th. Consisting of our annual Spelling Bee, Writing and Art Competition award ceremony and a fun time with tongue twisters, everyone in attendance had an amazing time. 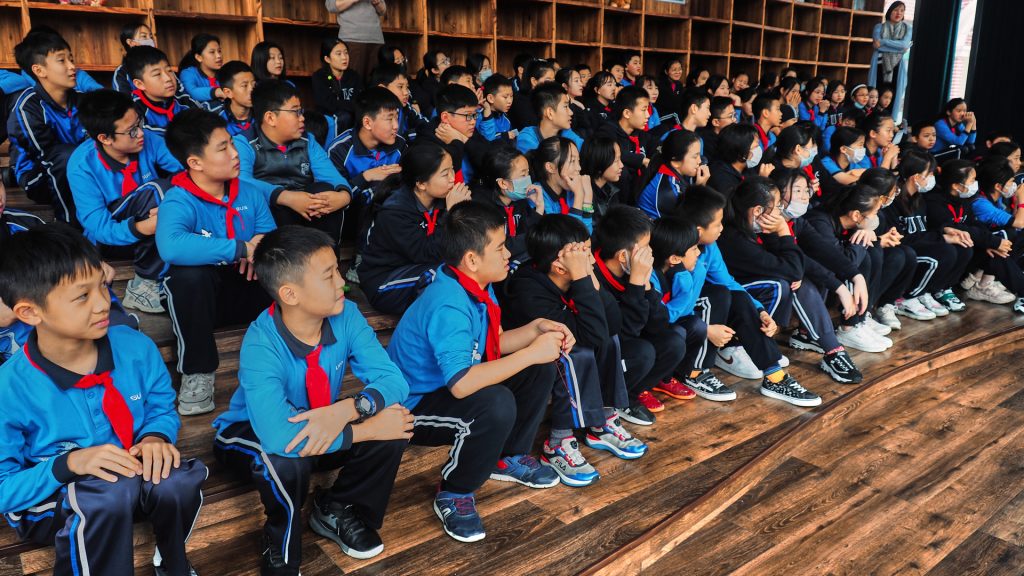 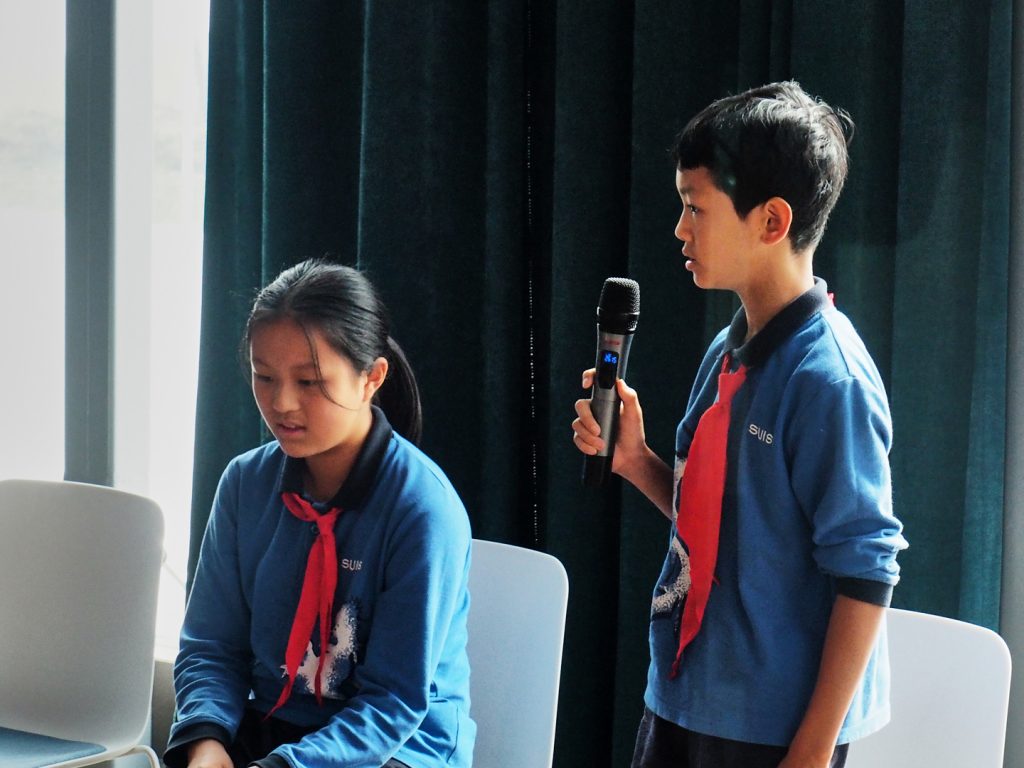 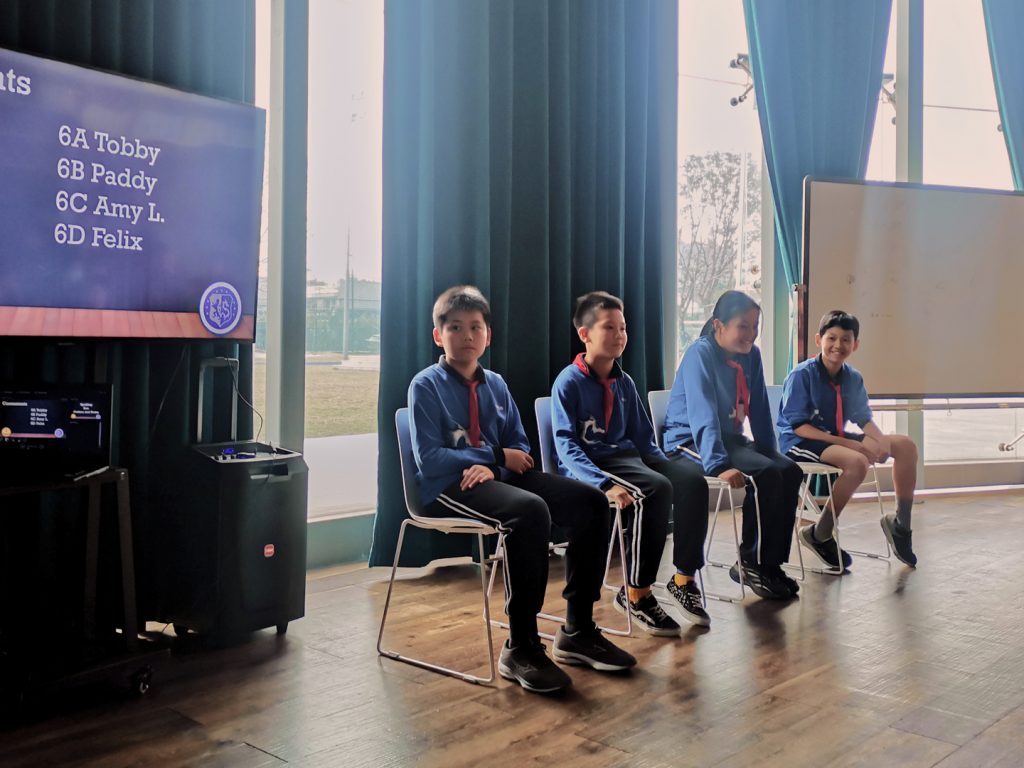 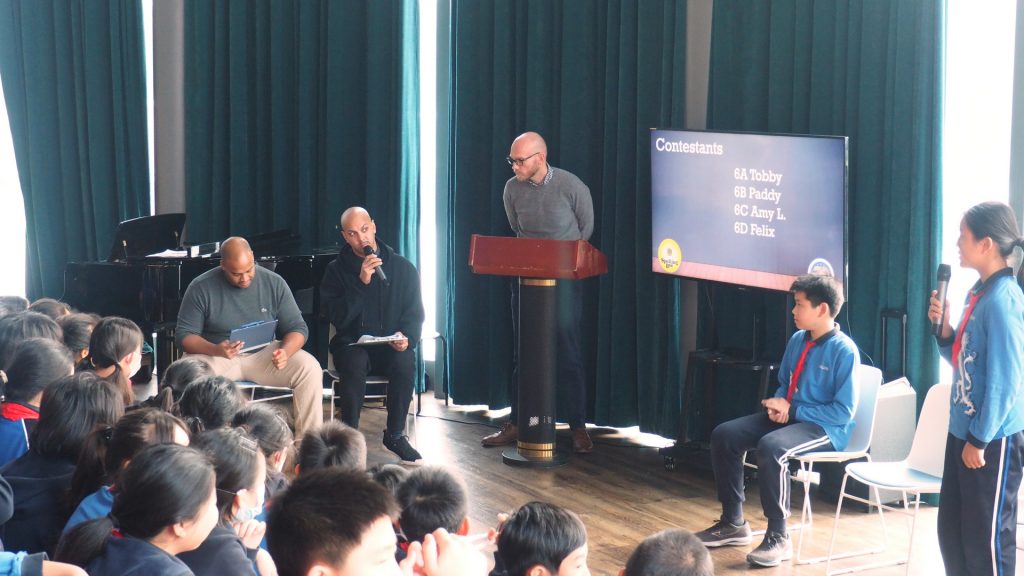 The students who were selected to represent their homerooms in the Spelling Bee came to the front of the stage a bit nervous, not knowing what to expect, but walked back to the audience as heroes in their peer’s eyes. The students did an amazing job, spelling difficult words to the wonder of their peers, but only one student could take the prize of top speller. That student was Tobby from 6A. He was confident and well-spoken, eventually topping his competitors. Congratulations to Tobby and the other students who joined the Spelling Bee. We all look forward seeing more spelling prowess next English Festival.

Following the Spelling Bee, the Writing and Art Competition award ceremony commenced. Two weeks prior to the festival, the students were given the opportunity to submit an essay on the topic, “My Hero”. This essay was a chance for the students to show their writing skills and let us know who their true hero is. The students could also submit an original piece of art based on their favorite English story. The quality of essays and art was amazing. In the end, each homeroom had one outstanding submission chosen as a winner and their creators given certificates of achievement and rewards. 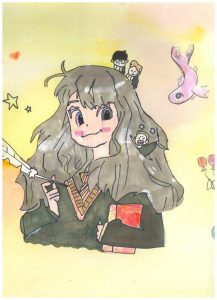 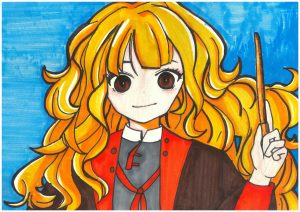 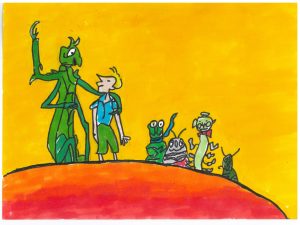 Finally, a little fun. Students were invited on stage to compete each other in performing tongue twisters. Many tongues were twisted and laughs were made from the audience. In the end, Mr. Sal and Mr. Wilson had their turn to battle. To the amazement of the students and teachers, Mr. Sal showed his gift at rap and rhyme, clearly defeating his rival on stage. We now know that if Mr. Sal was to ever choose a different path in life, Hip-Hop would be a solid alternative.

In the end, all students who participated in the events walked away with rewards and a sense of accomplishment. It was an amazingly successful English Festival for our grade 6 students. We sincerely look forward to more festivals with this amazing group. The next day, the 25th, the grade 7 and 8 students at the Xueye campus had their turn to shine. Entering the assembly room adorned in their house colors, smiling and excited, another Spelling Bee was held. This time with eight competitors on the stage. The final winner of the event was Emma Z., from 7C. Her confidence on stage was obvious to everyone in the room. Following the festival, Emma said that when she heard the final word for the win, she knew the title of top speller was hers. Congratulations to Emma and the other competitors!

This year, for the grade 7 and 8 students, a new event was held, the House Trivia Competition. House captains were called to an assemble a team of 4 students from each house, once assembled, the groups engaged in a tough, yet fun, round of Trivia. After many ups and downs, the blue house came out the victors. 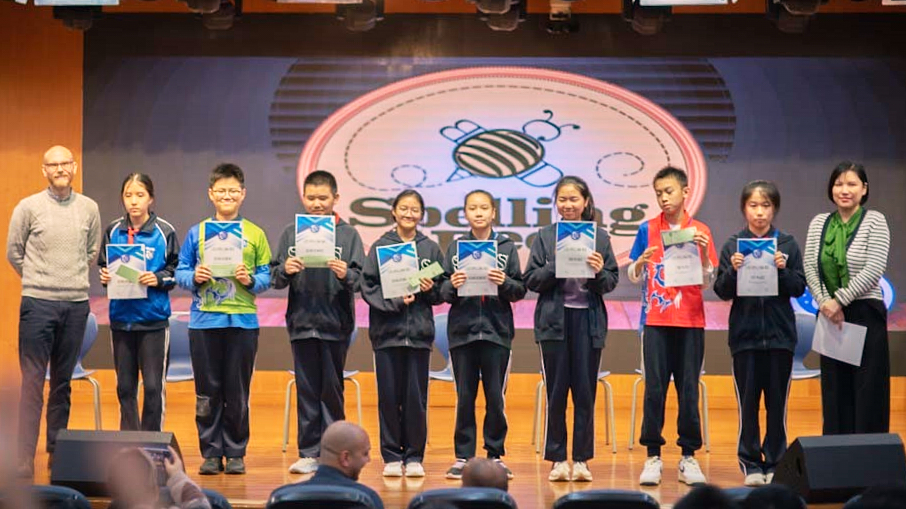 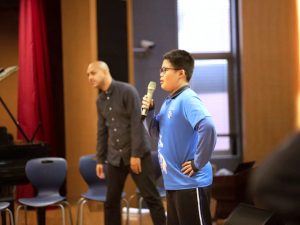 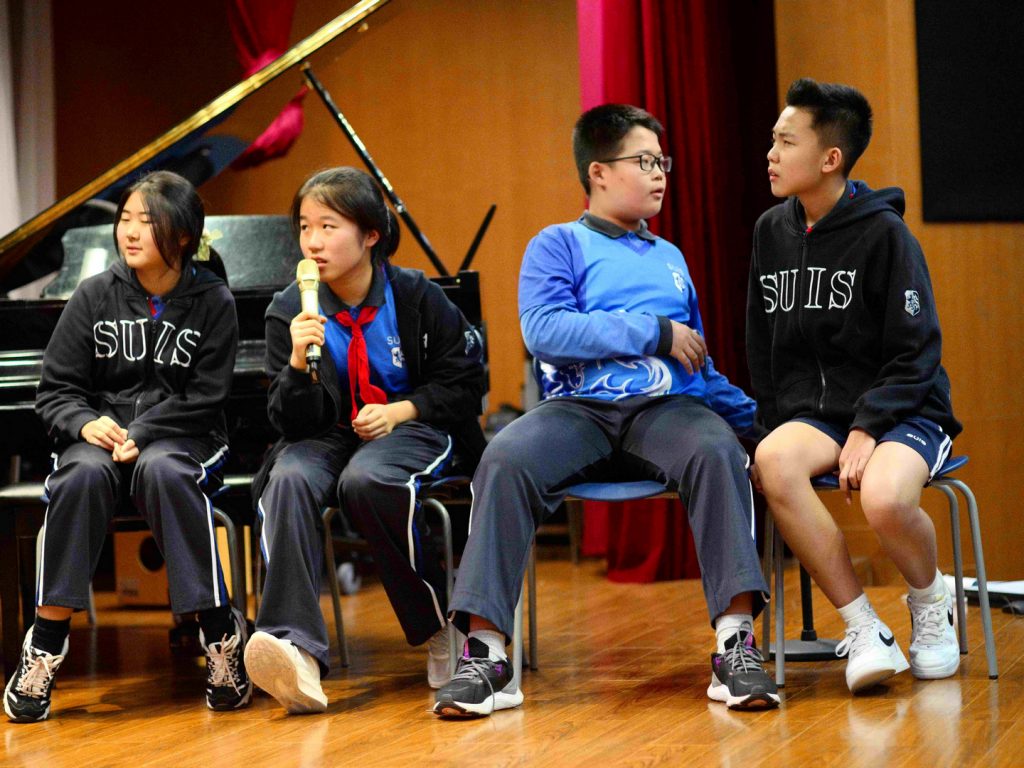 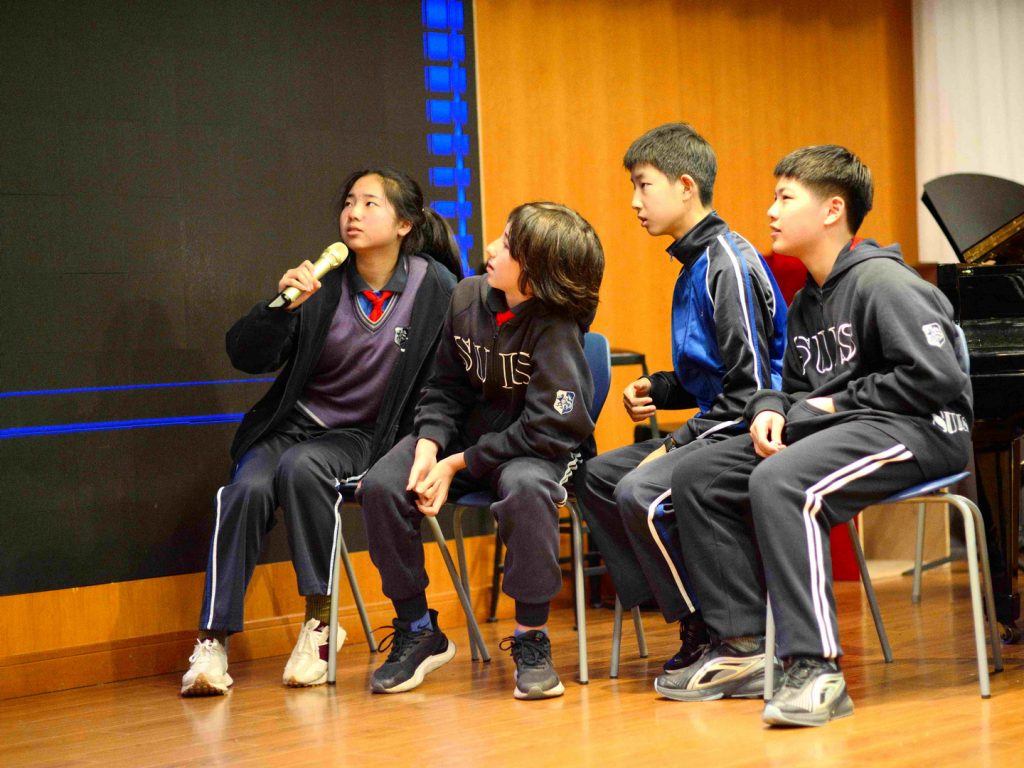 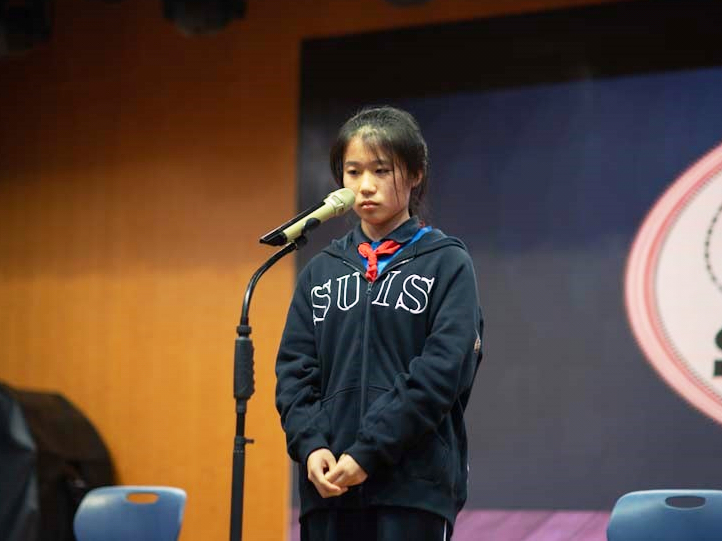 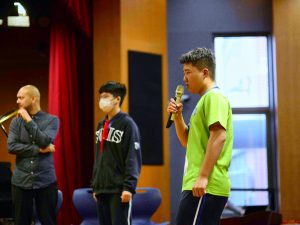 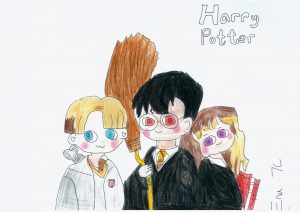 After two days of fun and entertainment, the students came away from the English Festival happy, having shown their love and appreciation for English. We are all looking forward to next year. Who will be our next champions?