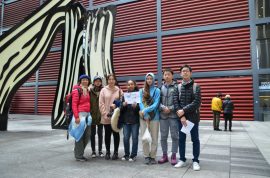 Written by: Andrea, Joe and Cathy in IG-1

After 6 days in Madrid and a long trip back, we’ve finally arrived back to Shanghai…

During the trip we experienced so many amazing things and felt all kinds of emotions. Everywhere we went, and everything we did was new and interesting. Read on to hear about some of our most memorable moments.

After arriving in Madrid (and having one of the biggest lunches I’ve had in my whole life!), our next stop was the ‘Vincente Claderon’ stadium to watch a football game between Atlético Madrid and Celta Vigo. Before the game we went to the stadium museum showing the history of Atlético Madrid – what shocked me in the museum was how big (and by big I mean HUGE) the trophies used to be, it made me wonder how they carried them around…

I think that my favorite part of the match was the exciting atmosphere which lasted throughout the match, even though it was raining.The fans were literally crazy with their singing, chanting and cheering. For me, this was one of my favourite moments of the trip.

The second day, we went up on a famous rooftop in Madrid. After climbing the stairs, we were finally at the top of the building, looking down onto the magnificent city- beautiful Madrid.

I thought the position we were standing at was the best viewing point we could’ve found. Later, we made IG1 Sean and Joe became our private models – after all, where better than a beautiful Madrid rooftop for a photo shoot? Sean and Joe made many different kinds of poses; luckily behind them was the city centre of Madrid so all of the pictures were amazing. Looking at the photos closely later on, we couldn’t help but laugh a little bit…

When we reached our destination, we got off the bus and walked towards the school’s front door; we could already see some of the students as they opened their classroom windows and greeted us with great enthusiasm. Next we met the headmaster of the school, who took us to a classroom. As we were walking towards the building ahead of us, I saw some Spanish students looking at us curiously. As I was too nervous I had no idea what to do so I smiled at them.

After we entered the classroom and each found a seat next to a Spanish student, we made short introductions and started to get acquainted to each other. I shouldn’t have worried – they were all so friendly and welcoming!

Soon, it was break time. The students showed us around the school, including all the facilities and different classrooms. I have to say that they had so many classrooms and a huge variety of different classes and subjects.

Each group was given a topic to discuss. The conversation went really well, if there was a question I didn’t understand, they would kindly answer me. Instead of it being awkward as I thought it would be, the Spanish students were all easygoing and so nice to us, so we started getting closer much faster than I thought.

Fun times always end quickly, and sadly it was time to say goodbye. We hugged them and took photos with them, but the thought of leaving was a hard pill to swallow.

This trip to the high school was and will always be a very valuable experience for me. It taught me about the different cultures between of the two countries, but it also showed me more about the kindness and acceptance of humanity.

There are so many more memories… seeing Picasso’s ‘Guernica’ at the Reina Sofia museum, Touring the Royal Palace, walking through the busy streets of Gran Via… Although I’ve only mentioned a few of my best bits -all of the activities we did in Madrid will always be remembered. We will miss every little bit of it, Adios Madrid!